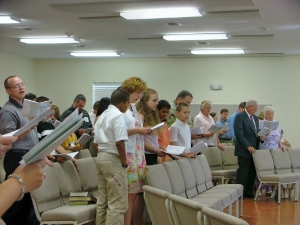 Grace Community Presbyterian Church had its first worship service on January 2nd, 2005, which was held in a strip mall located on Highway 377 in Watauga, TX. This church actually began in the hearts and minds of a group of people years before as they began meeting in a home in north Ft. Worth. Because of their love for the doctrines of grace and their perseverance and God’s good providence, Grace Community Presbyterian Church now exists.

Our first year together, 2005, brought much change. Our attendance doubled, we purchased 6 acres in north Ft. Worth, we raised 80% of the money needed to begin our first phase building project and we hired an architect and moved forward with our plans. 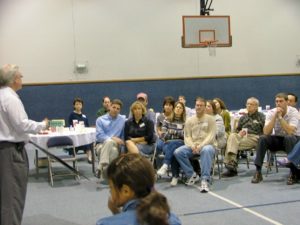 Meeting with our architect about first steps to build our first space. November, 1995.

God continued to grow us in 2006. We nominated men for leadership in June of that year, elected them in August and were organized as a particular church of the Presbyterian Church of America on August 13th, 2006, at a service of Organization and Particularization held at Bette Perot Elementary School located in north Ft. Worth. (Please see our Leadership page to learn more about the elders and deacons God brought to Grace Community Presbyterian Church to help lead us.)

In the early part of 2008 our church called Tom Browning as our assistant pastor. 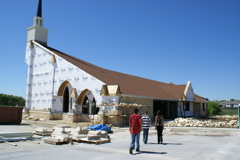 Construction of First phase of our building.

We had our first worship service in our new building on September 30, 2007. By God’s grace and through the generosity of His people, we were able to pay off the note of our building in December of 2009.

As this church has continued to experience God’s blessings in amazing ways, she began a building expansion project in the last quarter of 2011. 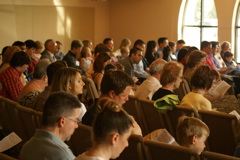 From our very first worship service in our new building (phase 1). September 30, 2007

It was completed in December 2012. With this expansion, we were able to double our square footage. In addition to many new classrooms, we are able to seat about 400 in our chapel.  We are committed to not growing beyond what our current and final space can accommodate.  It is our conviction that this would be as large as we would want our congregation to grow, so that we can continue to minister faithfully to one another. If we grow in numbers beyond what our new worship space and building can hold, our hope is to plant one or more daughter churches in surrounding areas.

In the early part of 2014, we were able to call our second assistant pastor, Davis Morgan.

The summer of 2014 we had the opportunity to build a large kitchen. We eat together once a month after our worship service and this kitchen has provided us the space and equipment to host these large lunches. At the same time we were able to provide for our growing families a first rate playground. This was something our many children had been asking for since we occupied our first phase building in 2007.

In December of 2015 we paid off all loans regarding our building expansion and new kitchen. Because of the generosity of the people of Grace Community Presbyterian Church, we began 2016 completely debt free.

We also completed a pavilion in late 2017, believing it will serve our people well for years to come.

In June of 2017 we ordained and installed our newest officers. This is another wonderful provision of our God for this particular church. Read more about our leadership on this page. 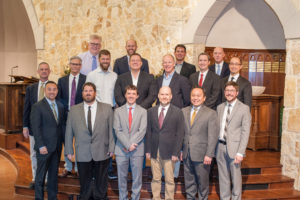 Davis Morgan, our Associate Pastor of Families and Youth accepted a call to be the solo pastor of Westside Church in Colorado Springs, a post he assumed February 16 of 2020.

To our delight and with much thanksgiving, we hired Andrew Sarnicki to be Director of Youth and Family in February of 2020, officially taking on this role April 1, 2020.

God has blessed us with a facility that is used by our presbytery for women’s retreats, our presbytery meetings and other PCA functions. There is also a homeschool Co-op that meets every Thursday for classes during the school year.

Throughout our history we have sought and will continue to seek to provide opportunities for pastoral interns to serve alongside us as they are considering vocational ministry.

God has blessed us immensely with members who serve, leaders and a facility; all of which bring glory to His name.

We realize that the history recounted here is another way of retelling the story He is writing. If you are so inclined, please pray for this church as we seek to be faithful to God in the place where He has placed us.

We are meeting together again. If you are unable to attend, you may join with us on YouTube Live Sunday at 10:30.